And the Winners Are... 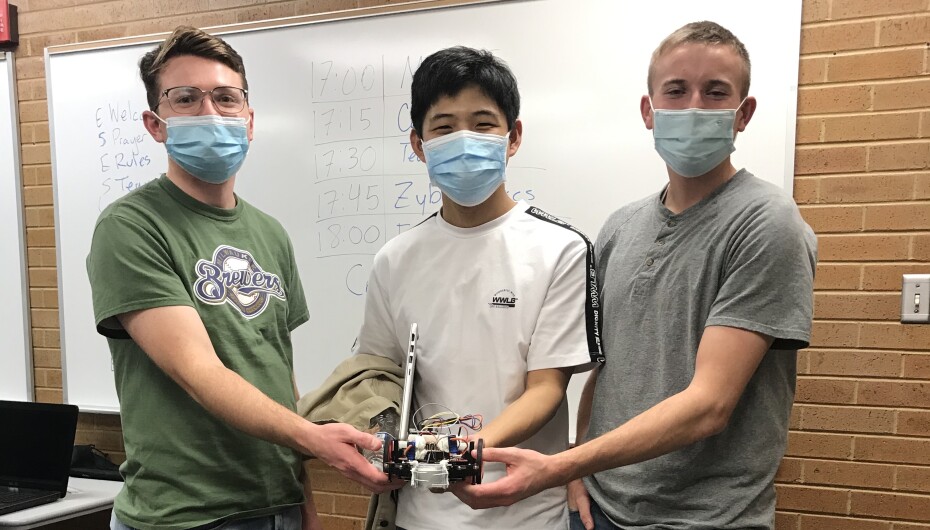 Friday was the night.

The first ever EC EN robotics competition, sponsored by Texas Instruments, went down. The five best robotics teams from the Electrical and Computer Engineering Department competed for the grand cash prize of $500 and more importantly, a legacy as the department’s inaugural robotics champions. Of the sixteen teams that signed up, only a handful completed the trial rounds and the five teams with the fastest times had a shot at the grand prize.

The robots’ objective seemed simple: navigate a cardboard maze, collect the pink ping pong ball at the end, navigate back out. Bada-bing, bada-boom. However, anybody with experience dabbling in robotics knows that simple is not in their vocabulary. The teams spent the past week practicing in the practice maze, making tweaks, and trying again.

“You know, practice doesn’t always make perfect in real world situations,” Michael Eyler says. Eyler spearheaded the competition, his brainchild, from start to finish. The teams learned that lesson firsthand when they discovered new glitches while running their bots in the real maze.

The first team to compete, Maize, made a major redesign to their bot in the last forty-eight hours of the trials and made their qualifying run the day before the final competition. They removed the hamster-wheel contraption meant to scoop up the ping pong prize and replaced it with a bumper of high-quality duct tape to stick to the ball instead.

The hardest part of the competition, according to team captain Dinah Squire, was finding the time for it, but the hours paid off when their bot retrieved the ball successfully. In a clever move, they programmed it to push the ball against the maze walls post-retrieval to ensure good adhesion, and it exited the maze with a time of 2:05.

The next team, CaMACHO Bots (yes, in honor of the faculty member himself), had the most runs under their belt as well as the first successful trial run of the competition. Their robot was simple - with no moving parts besides the wheels - and classy - with a dapperly dressed rubber duck courtesy of team captain Parker Awerkamp’s daughter on top. They nicknamed the machine “the Billdozer”

CaMACHO Bots also took the sticky approach to capturing the prize. In what Dr. Smalley described as a “humane repurposing,” they used a rat trap to stick the ball to the robot. Although this repurposing rendered balls unusable after one run, it enabled the Billdozer to escape the maze with the ball in 2:10.

Third came the judges’ favored winners, Zybatronics. This team attached to their robot a claw similar to those found in toy machines, but this robot did not toy around. It zipped through the maze and back out with the ball in 1:03, cutting the previous teams’ times in half. On a second run, it beat its own record and came out with a time of 54 seconds. They credited its speed to a well-programmed line sensor.

Team 404: Team Name Not Found, had what Eyler lauded as the most creative approach: drone suction power. Four cardboard cylinders on the outside of the bot disguised a drone attached to its top. When the bot faced the ball, the force that would usually push the drone upwards sucked the ball through a tunnel attached to the bot’s front instead. Although the drone did its job, the robot struggled through the maze and ended up disqualifying itself after three failed attempts.

Exploration Engineering ended the night with a red suction-cup-style contraption capping their robot. The all-junior team struggled on their first run. On the second run, their bot picked up speed, but took three penalties and ran out of power before it could finish. Round three brought redemption. With fresh batteries, the robot zipped through the maze and back out in 1:27.

Zybatronics blew away the competition and took home the $500 grand prize.

Next semester will bring a new challenge for whoever is ready to try their hand at a new prize.