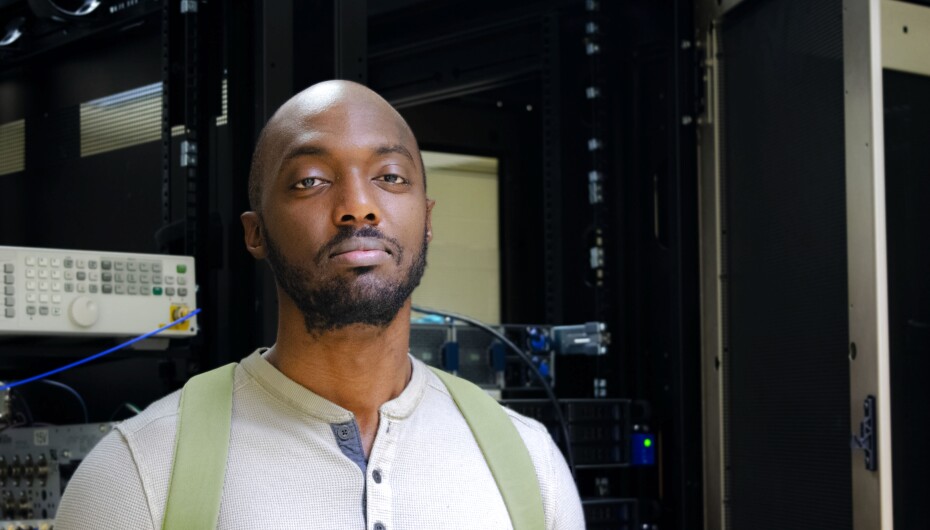 Mark Ruzindana cites a few people as his inspirations: his parents and sisters, professional rock climber Tommy Caldwell, and Batman.

“It’s a nerdy thing to say,” he admits of the latter, “but then again, PhD in electrical engineering.”

Ruzindana, who aims to defend his dissertation by the end of the year, explains that he gets inspiration from seeing people - fictional or otherwise - do the best they can at whatever they are doing. It’s an ideal that motivates him both as an engineer and in other pursuits off of campus.

As an engineer, he processes and analyzes signals from deep space for Doctors Jeffs and Warnick’s radio astronomy systems group. The group captures data with phased arrays, transports it to the digital backend where FPGA’s further process it, and from there, the data goes to HPC’s. Then Mark comes in. In the HPC’s, he utilizes GPU’s to process the data in real time and writes data for beamforming. “I really like figuring out math and implementing it in software,” he says. “If I could just do that forever, that would be great.”

His work is changing the game for astronomers. His real-time beamforming algorithm helped the Focal L-Band Array for the Green Bank Telescope (FLAG) capture data of a pulsar (a rapidly rotating neutron star) located lightyears away from Earth. “That is very cool to see,” he says. He also wrote an RFI mitigation algorithm for a currently in-development project for the Office of Naval Research, which will likely be used in other radio astronomy projects down the line.

His astronomical work began with an interest in superheroes, specifically those of the self-made set like Ironman and - you guessed it - Batman. “I was like, I can do this. Applied science is what I want to do, and electrical engineering is essentially applied science.” As an undergraduate, he asked Dr. Warnick if he could check out the radio astronomy systems group, almost on a whim. After he understood what they did, he discovered his interest in the signal processing side of things and his affinity for algorithm design that took his work to deep space.

He stayed with the group until he graduated with his Bachelor’s of Science, but still felt like he didn’t know enough. “That wasn’t the problem,” he explains. “The problem was that I didn’t have that confidence, so I went to grad school...Then I started to do the Master’s, and I told myself if I still liked doing research, I would go for the PhD.”

And he liked it, so he did. He described the change to doing graduate work this way: “I didn’t have the ability to learn in the sense that you fully acknowledge what you don’t know and that you want to learn it. In my undergrad, I was focused on getting the homework done, getting the exams done...there was a switch that I had to make. And that really helped.”

As did giving himself a variety of pursuits in which to channel his energy. When Mark isn’t advancing radio-astronomical software, he engages in rock climbing, archery, and mixed martial arts. Pushing himself outside of the lab is what keeps him sane.

“There was a period when I felt like I wasn’t doing enough of what I wanted to do in life out of fear or nerves, so I just decided to do as many things as I could despite the fear (and I still do so today)” he says. “Then I saw Jason Momoa climbing; I saw him bouldering. And I decided to go check it out at a climbing gym.” Mark committed to climbing and now goes to the rock gym at least once a week. He takes it outside when he can, but even in the canyons, it’s not a complete break from school. “It’s similar to engineering. There’s the problem-solving aspect, so you have to figure out how to climb the particular thing.” It also takes endurance, a quality critical to any degree in electrical or computer engineering.

He also tries to fit a round of archery into his week and nurtures an interest in martial arts. “Oh,” he adds, “and I watch tv and movies and stuff too.”

Basically, he is striving to get to the ideal for himself in all aspects of a well-rounded life. For now, that looks like developing algorithms for analyzing deep space and preparing to defend his dissertation, but next year, he hopes to take his knowledge and ambition into industry. “I’ve seen some really, really cool stuff in medical imaging...I don’t have experience in that area, but the math and the software development are similar, and I think that I can do something in that field.”

Seems plausible. Like any good student, radio astronomer, or rock climber, Mark has proven himself more than capable of ascending to new heights.