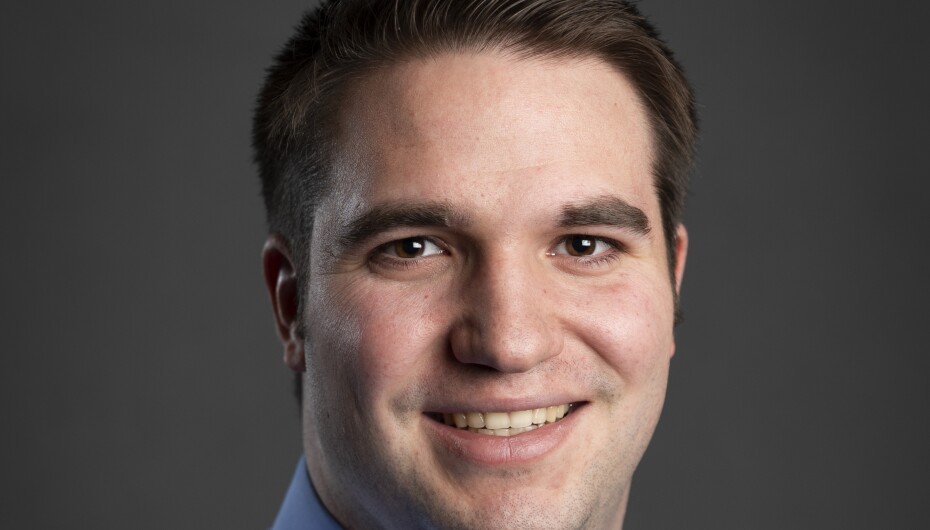 Boy Scout camp has a cherished place in American hearts for its role in teaching the skills essential to life: wilderness survival, first aid, citizenship, and - if you’re PhD student Jakob Kunzler - calculus and differential equations.

“I went to a scout camp and they had a water balloon launching trebuchet, and I really wanted to learn how to aim the trebuchet with math,” said Kunzler, who had been learning high school math online since the fourth grade. He had recently received an HP-50G graphing calculator for his twelfth birthday the week before. He said, “My troop made fun of me for bringing it to camp, but I wanted to use it for the geometry/vector math while navigating in the Orienteering merit badge. My counselor was shocked that I could navigate the map better than him. Drawing lines on the map got me thinking about how a water balloon navigates the sky after launch. My batteries died at camp, so I had to wait until I got home to start working on it.” So he got home and started programming it to help him solve where a projectile launched from the trebuchet would land. “It turns out I started thinking about things in a way that is very similar to calculus, even though I didn’t know I was doing vector calculus at the time,” he said. ““It was quite the shock years later when I was reading my AP Physics book and realized I had been numerically solving differential equations without even knowing it!”

“You’re probably thinking ‘dude, this guy’s a nerd,’” Kunzler said after relating his experiences, “and you’re probably right!” But Kunzler, recipient of the Department of Defence’s SMART Graduate Fellowship to fund his dissertation work at BYU, now has a more difficult problem to work on: impressing his Doctorate committee. Kunzler loves the mentorship he receives from all of them, but at the same time, is eager for graduation. “Along with my funding, after graduation I get to work at the Naval Information Warfare Center in Charleston, South Carolina as a civilian research scientist”. As part of his fellowship, Kunzler interns for the Warfare Center during the summers until he graduates. “It’s a ton of fun, but it sure makes me hungry to finish. There’s so much cool stuff out there, and my BYU education is perfect preparation. In fact, it’s such a good fit that I occasionally have project managers ping me during the school year wondering when I’ll be done, and after disappointing them, they ask my advice on designs. Talk about application-based homework!”

He excels at what he does - and he does a lot. “At BYU, my primary project (I have lots!) is working to improve GPS services for unmanned aircraft,” he said. “In the last year or so, a new generation of digital system-on-chip devices have enabled wonders in signal processing. Processing that used to require a full server cabinet can now fit within a cereal box. I’m trying to show the world that these system-on-chip devices can practically drive multi-antenna digital beamformers in flight. With digital beamforming, GPS can resist bad actors and offer improved reception in crowded environments.”

He likes to dabble and dives into two or more projects at a time. His external navy funding enables his passion for dabbling; while most sponsors only pay graduate students for working on specific projects, the Navy allows Kunzler to choose his own projects as long as he commits to four years of service after graduation. For Kunzler, committing to a “well-funded defense job in a high-tech secret lab” for funding hardly qualifies as a sacrifice. The arrangement benefits both parties. Kunzler has interned with them the past few summers and in his words, “when I got over there, I started looking around and realizing that everything that I’ve been training and doing here makes me a perfect fit for my job going in there. My managers were actually very impressed that I’d worked on so many things and knew so many things because I could basically fit in anywhere.” Better yet, the Warfare Center prides themselves on their diversity in skill set and research, and scientists there often dabble among several projects at once. “I’ll probably have [three] at any given time,” Kunzler said.

He enjoys projects with a strong mathematical framework behind them, but his favorite project, he said “is whatever I’m currently working on. I get really passionate. I get that rush, like in ‘Fast and Furious,’ and just want to dive right in. My wife can tell when I start a new project because I get a goofy grin. I have a lot of fun.” (As a side note, Kunzler really enjoys fast cars and racing video games.)

Originally, he planned on a mechanical engineering major and designing race cars. Without a parent or mentor with an engineering background, he did not know computer engineering existed, and he gravitated towards what he knew: the heavy machinery and car shows common to the Reno area he called home. “Just because that’s really visible,” he said, “you think ‘oh, I should design those.” Kunzler was building a dune buggy as captain of the BYU Jr. Baja team when a freshman-level programming class altered his course. “Once I took that programming class, I realized that there was this whole field of electrical engineering that wasn’t just wiring up a house. Teaching a full-sized computer how to solve math problems so much faster reminded me of my graphing calculator days. I realized I wanted a future working with computer technology.”

His two-year mission in Florida also helped feed his passion for the field. He met a former computer engineer who explained how computers worked, and when he got home that night, he wrote down everything he could remember in his missionary journal. “I started drawing circuit diagrams,” he said. “Well, now I call them circuit diagrams. Back then I didn’t know what I was doing; I was just trying to add two numbers together. I figured out how to add two numbers together in binary. I was so excited when I figured it out I ran out to my companion. He looked at me and said ‘great, now you can help me add up the numbers in the area book.’” Although he tried to temper his passion for mathematics in order to stay focused, his mission president assigned him to design a data analysis tool for the mission after learning of his knack for programming. Kunzler spent a week putting together what he described as a “poor man’s graphic user interface,” an analysis tool that combined an Microsoft Excel calculator and Powerpoint presentation that showed charts of each zone’s numbers. It so impressed his mission president that when he ran out of Spanish-speaking missionaries, he assigned Kunzler to learn Spanish with only eight months left in his mission. Said Kunzler, “I know that I received divine help. I was teaching comfortably within a month, and that doesn’t happen by chance. Don’t get me wrong; I was working my tail off, but the day I finished reading the spanish Book of Mormon, my skills tripled. My companions were shocked.”

He came back, plunged into the program, and married an opera singer and music education major with almost as much school ahead of her as he did. “Emry is just as nerdy as I am, but about music, so it works out pretty well,” he says. “We can both be nerdy independently and we don’t have to compete with each other.” All the same, Kunzler has found ways to combine their passions, saying “I discovered the ratio between frequencies of adjacent notes is (0.5)^{1/12}. I keep telling her I understand the harmonic series and how they’re all related, and she’s like ‘I don’t care.’” While she fretted over the nuanced difference in sound coming out of their electronic piano, Kunzler said, “I’m laughing because in my mind I’m like ‘well, that thing’s reproducing at 96k’; what more could you want?... The other engineers reading this will get it.”

In his personal life, he confessed Dr. Long got him started a few years ago on making puns based on electrical engineering principles that the people with whom he converses don’t understand and said “sometimes I make comparisons to something technical in church or at parties, then I find myself backtracking trying to find a better metaphor. It’s hard sometimes!” But when he spends seventy hours a week immersed in graduate research, it’s hard to blame him.

He loves his work and admires his professors (like Doctors Warnick, Jeffs, Long, Nelson, and Rice), but he credits his greatest inspiration to President Russell M. Nelson of the Church of Jesus Christ of Latter-Day Saints, and said “not just as a prophet, but as a prophet and a person.” After reading both of his biographies, Kunzler developed a ton of respect for President Nelson as a speaker, leader, father and researcher. “He got super curious,” Kunzler said. “In the same way that I feel like I’m curious about engineering stuff, he got super curious about heart surgery in the days before all this research was done. I mean, he was running a laboratory in his garage.”

He described President Nelson as a mentor of sorts for him, a role that Kunzler values deeply. In fact, when Kunzler served as president of BYU’s branch of Eta Kappa Nu (the IEEE and Electrical Engineering honor society) he set up a mentoring program where he connected senior members of the society with freshmen new to the major. He said, “I find it hugely important that older students have the opportunity to come and mentor younger students, because I think about all these things that I had to figure out on my own, and then I think about all these things that people taught me and just how much further it got me when I had a mentor just to point me in the right direction.” Although the advent of pandemic precautions halted the program, he still expressed a desire to help: “If any younger student - if anybody - wants to talk, I’m willing to talk and be a mentor to them. Email me atjake.kunzler@gmail.com. We can zoom.”

Going back to the trebuchet problem, Kunzler realized how many factors he could not control and never did solve it. The realities of random disturbances and unknown aerodynamics made accurate modeling impractical, so he never validated his measurements. “Sometimes,” he said, “you just need faith that the model works on average. I don’t think we’ll ever fully understand all the details and nuances about why things happen in life, but that doesn’t mean we should discount the existence of God’s master plan guiding it all.”