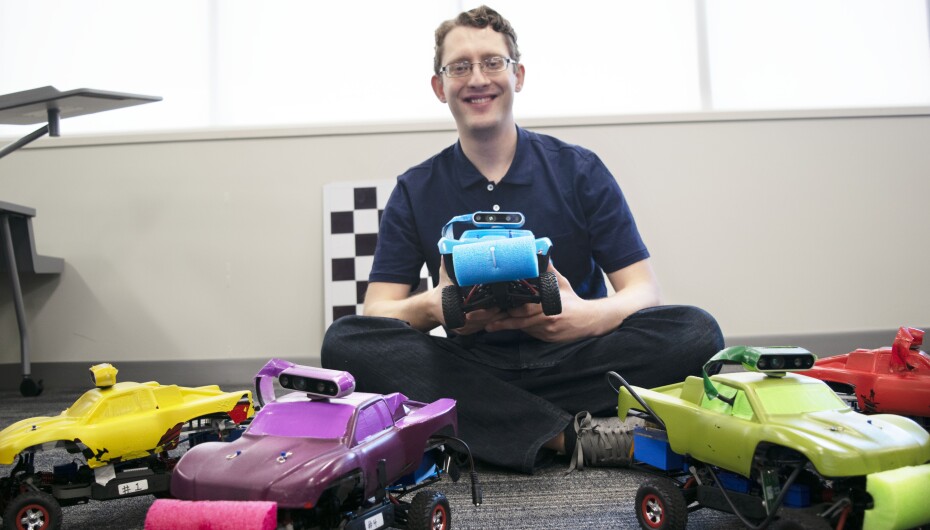 At the same conference where grad student Farah Arabian took home third place for her presentation on mobile systems last week, another ECE student placed for his presentation on the self-driving car platform featured on BYU’s YouTube channel and the recent department tours.

What is this, a crossover episode?

Jacob Newman took home second place for his submission: a paper about the self-driving platform he and two other students built with Dr. Lee. (If you haven’t heard about it already, watch the video here!)

It started two summers ago, when Dr. Lee proposed the idea of a self-driving car class and Newman volunteered to help out.

“As a computer engineer, that’s one thing that I’ve become really interested in - the interface between the software programming and actually seeing the results...For example, having the self-driving car actually do what you want it to do,” he says.

Newman wore many hats in the process: his responsibilities ranged from painting the cars bright M&M hues to programming them to stop for red lights and other cars. They marked the track, arranged the cameras, installed sensors, and built the quaint city of “Leehi” around the roads, complete with the tiniest Costco you have ever seen. He and his team figured it out as they went. “For the small things,” says Newman, “we spent a lot of time googling.” For the big things, they had their combined brains and Dr. Lee’s vision, which included a “GPS” made with three cameras and a mock traffic light in the middle of the cars’ stomping grounds.

The end result manifested as the aforementioned self-driving car class. “I think one of the big benefits it has given is students being exposed to the terminology and the concepts and the ideas that self-driving cars have to face,” he says. The class enabled students to learn the basics of self-driving cars so they could feel confident learning more and going into the industry, if they choose. He cites this as one of the primary purposes of his paper. The other purpose encompasses the bigger picture - “to simplify the platform and make it easier for researchers to work through those challenges and come up with solutions on a smaller, cheaper scale.” Because, as he says with a laugh, “it’s cheaper to crash an RC car than it is to crash a Tesla.”

Newman will graduate this April and looks forward to earning his Master’s. “There’s so much technology out there. There’s so much to learn that a Master’s degree is just another step to mastering more concepts and being able to apply those concepts to something real life.”

He has already moved on to new concepts. Until recently, Leehi resided on the first floor of the EB and attracted the occasional spectator, but Dr. Lee, Newman, and company have packed it up and moved onto a new robotic vision project. Using computer vision and deep learning concepts, they are creating a system that will detect, label, and track football players from an overhead video.

And after that? “Still trying to figure it out, but I could see myself going down the self-driving car route,” he says (no pun intended - as far as the author is aware). He has also worked on the department’s Mars rover project and avidly follows the latest NASA rover on its journey to the red planet. He studies engineering because he sees different technologies advancing and wants to throw himself into the thick of them. “That’s the rewarding part - that I get to be a part of all the technology coming together and creating something awesome,” he says.