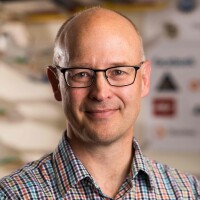 His primary research focus is in autonomous systems, unmanned air vehicles, and multiple vehicle coordination and control. He has published over 200 peer reviewed articles and has received over $6M in external research funding from AFOSR, AFRL, NASA, DARPA, and NSF. He is a fellow of the IEEE and an associate fellow of the AIAA. He is a former associate editor for the IEEE Transactions on Automatic Control, the Journal of Intelligent and Robotics Systems, and the IEEE Control Systems Magazine. In 1998 and 2004 he was voted the outstanding teacher in the BYU Electrical and Computer Engineering Department by graduating seniors, and in 2002 he received the Outstanding Professor award from the BYU Electrical and Computer Engineering Department. In 2004 he was awarded the BYU Young Scholar Award and in 2006 he was awarded the BYU Technology Transfer Award, and in 2009 he was award the Karl G. Maeser Research and Creative Arts Award for excellence in research, and in 2017 he received the Karl G. Maeser Distinguished Lecturer Award. His students have won numerous competitions and awards for their work on micro air vehicles.